Contents hide
1 What is Schema Markup?
2 What kind of results will the user see?
3 Why schema markup is important
4 How to do it

What is Schema Markup? 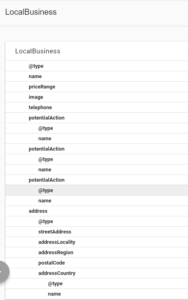 Schema markup is a form of search engine optimization (SEO) that is both very powerful and widely underutilized. Essentially, it is an extra bit of vocabulary that helps the search engines deliver more useful and highly relevant information in their results pages.

Schema markup is a collaboration between the major search engines. Between them, they came up with a common language so that search engines can process “extra” information and serve it up in a way that is easy for the user to digest.

What kind of results will the user see?

With schema markup is enabled, users will see more detailed information about your site; things such as location, hours, pricing, and ostensibly, what the website is all about.

For instance, let’s say I was looking for upcoming events at a local theater. My search query would return results that contain not only the theater’s web page link but also a listing of the events and dates in question. That is – if they have included that type of markup on their events schedule page.

You might go so far as to say that schema markup is like a digital business card, and some people do just that.

Why schema markup is important

If you are hoping to improve your rank for certain types of content, schema markup is the way to do it. There is markup that has been specifically created for topics and content that includes:

And these are just the broad strokes. In actuality, there are hundreds of types of markups that break down into tiny bits of data, allowing you to get pretty darn detailed about what you’re selling.

What it boils down to, in terms of importance, is that websites that use schema markup rank significantly higher than those that don’t. Statistically, only about .3 of all websites in the world use schema markup so, if you decide to go down that route, you’ll be that much further ahead of the competition.

How to do it

Now that you’re all fired up for schema markup, you’re probably wondering how to make it happen.

From the Google Search Console, open the Structured Data Markup Helper. Once you have signed in, it’s pretty easy to follow the steps to creating schema markup for each of your webpages (as applicable).

Basically, you will choose the type of page you will be marking up, enter your URL, and start tagging. Depending on the type of markup you are enabling, this could be a complex task; for instance, if you have complicated strings of event dates. Once you have finished, you will be prompted to select “create HTML”, which will then generate some code to be pasted into your CMS or your source code.

Using Google’s webmaster tools, you will be able to preview any changes and make any necessary edits.

Keep in mind that these tips on schema markup are just the broad strokes. It’s a vast and nuanced subject that can be plumbed deeply for best results. If you would like to learn more about schema markup, reach out today and let’s get started!

About the Author: Cindy Pruitt

GBC Digital Marketing has won awards for both designs and services.

GBC Digital Marketing is proud to be Google Certified in Analytics and Ads for search, display, mobile, video and more.

Our marketing division, GBC Digital Marketing, is proud to have been a certified partner of digital marketer out of Austin

We are proud to consistently be A+ Rated with the BBB. Winning their Gold Star Award each year.